ASB economists say even though debt burdens have increased, households should be able to tolerate reasonable increases in mortgage rates without budgets becoming unduly stressed

ASB economists say even though debt burdens have increased, households should be able to tolerate reasonable increases in mortgage rates without budgets becoming unduly stressed 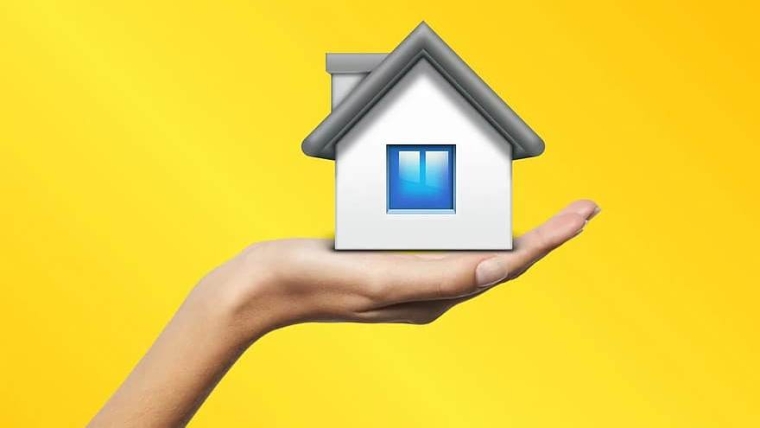 Even though the country is in the middle of what ASB economists describe as a "a debt feast", they say that households will be able to cope with reasonable rises in mortgage interest rates.

"We find that households, in aggregate, have a reasonable amount of buffer to cope with higher mortgage rates," ASB senior economist Mike Jones says.

"Rates would have to rise a fair way before incomes became unduly stressed. On our calculations, aggregate debt servicing costs and housing gearing levels are at the lowest levels on record."

In a new ASB Housing Insights publication, Jones concedes that "yes, mortgage borrowing has gone nuts". He points out that "ever-higher house prices" have meant that more debt has been required to either get onto the property ladder, or to trade up.

"New mortgage lending written over the past 12 months is thus up around 45% on the prior 12 months," Jones says 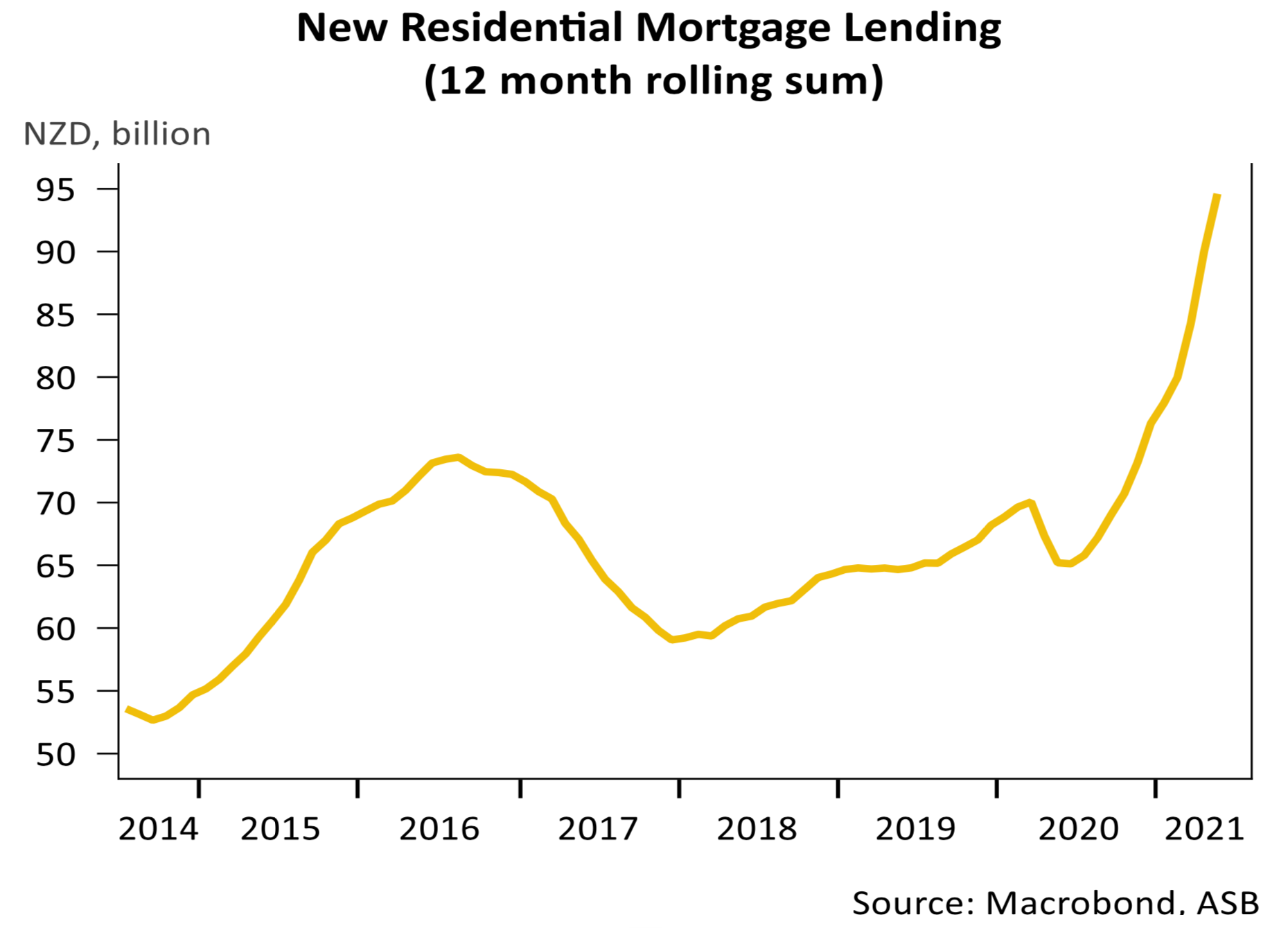 "Of course, household incomes haven’t increased by anything like house prices. This means that much higher mortgage debt is being serviced by roughly the same levels of income."

He says that debt-to-income ratios (DTIs) have therefore jumped up.

"RBNZ data show that households with a DTI ratio above six now account for the highest share of new mortgage lending, having been the lowest prior to Covid." 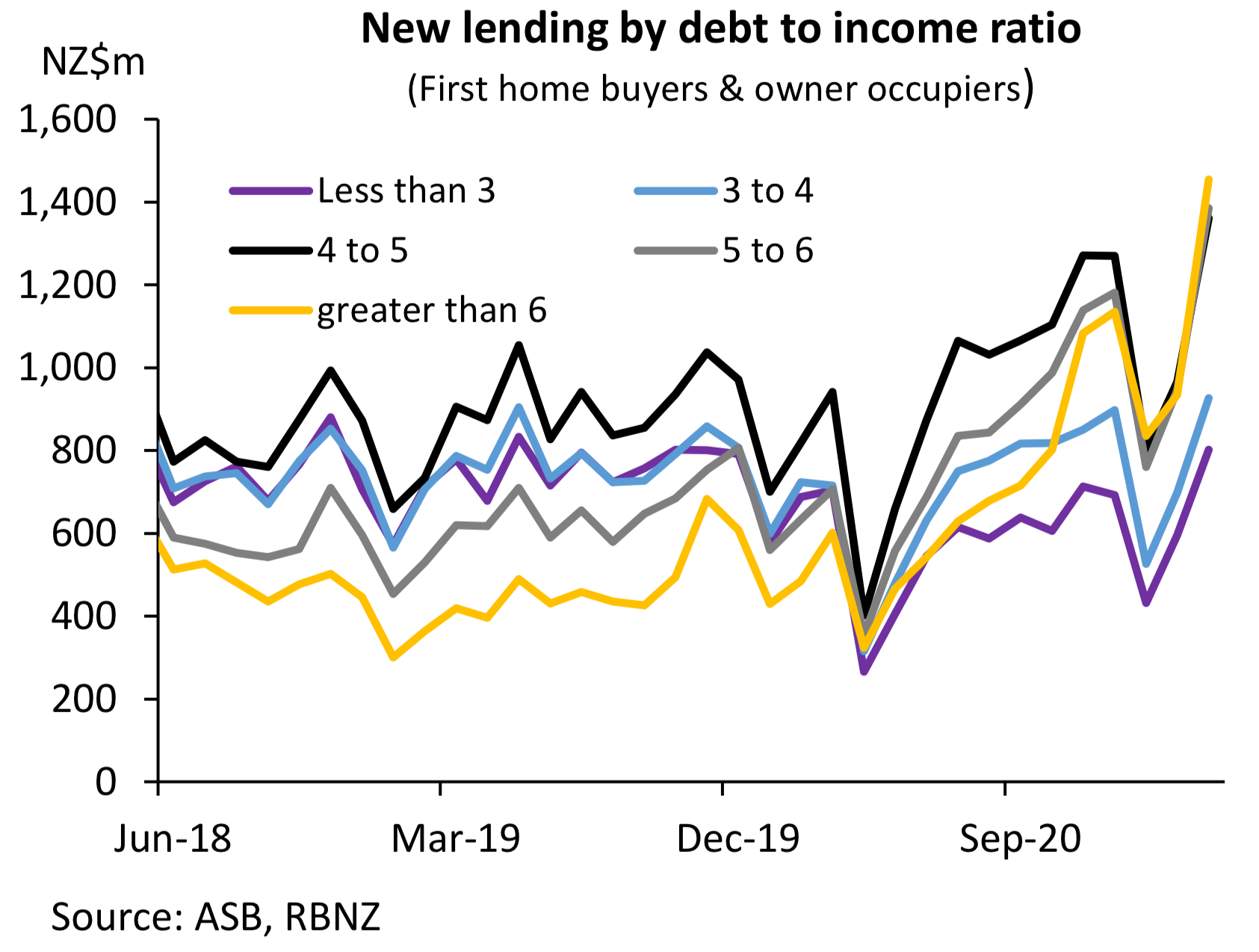 Jones says, however, that while the household debt burden has "shot up",  comparing household debt to equity shows household gearing is actually at the lowest level since records began.

"Our calculation of a housing gearing ratio has it at a little above 20%."

And despite record high debt levels, the cost of servicing this debt "is by no means excessive".

"In fact, it’s the lowest since records began at just 6% of total disposable income. Just prior to the GFC it was 14%."

This reflects the aggressive falls seen in mortgage interest rates over the past few years. 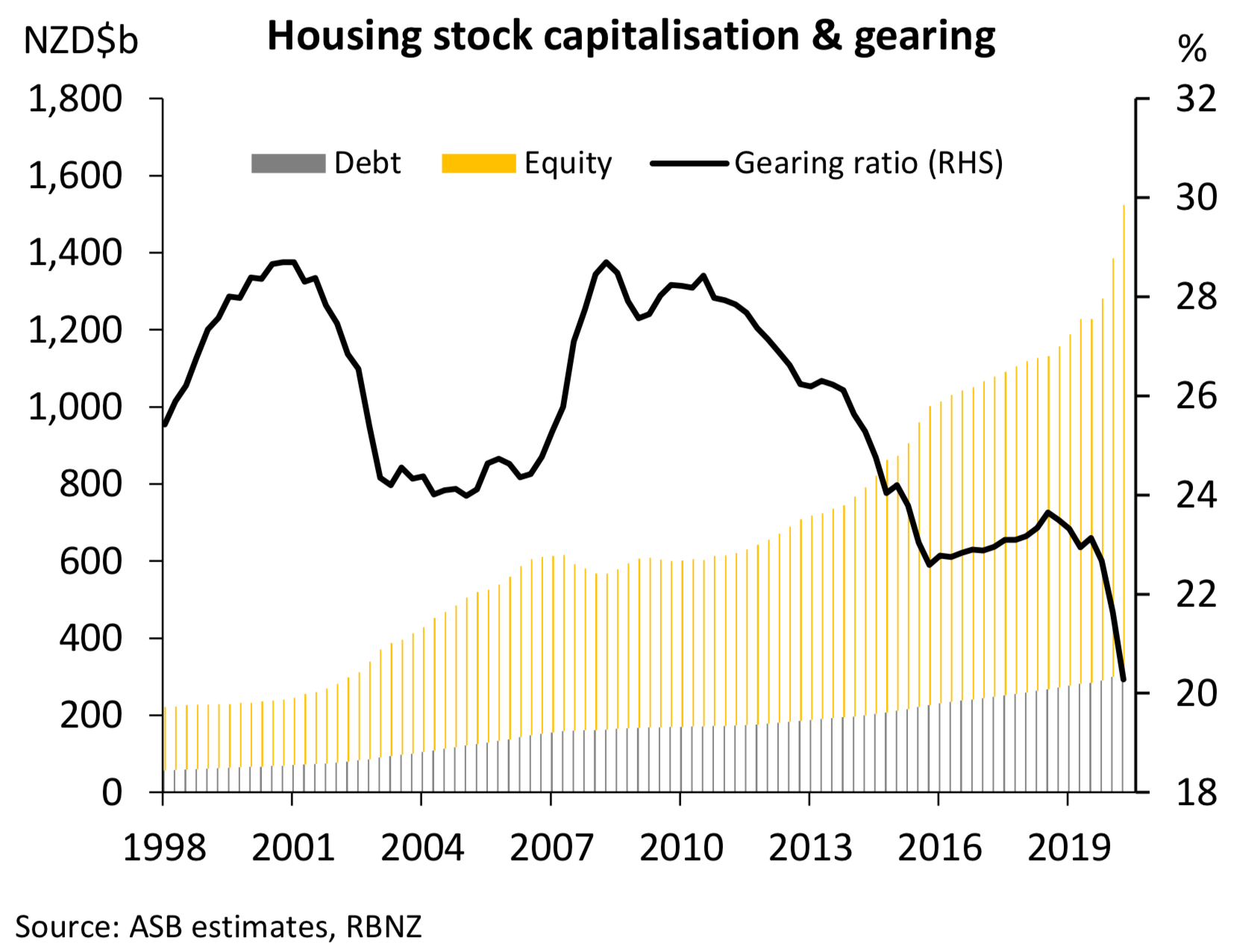 "The point here is that, given the very low starting point for debt servicing, households should be able to tolerate reasonable increases in mortgage rates without budgets becoming unduly stressed. Key in this regard is that unemployment remains low and modest household income growth continues. Our central economic forecast incorporates both."

But Jones says there are risks. And he says "newish" entrants into the housing market are more at risk from higher mortgage rates. They will typically have lower equity, and may not have budgeted for the risk that the “old days” return and interest rates finally go up instead of down.

"It’s best to consider an example. A household with an average disposable income that purchased a median Auckland home a month ago for $1,120,000 with a 20% deposit would have a debt servicing ratio of roughly 42% at current interest rates (including principal repayments). That’s already up there. A scenario in which mortgage rates jag up to around 5% would see debt servicing costs rise to 53% of income, all else being equal."

That would be "at the upper limit of what is considered manageable", Jones says -  albeit that these figures would look better for homeowners outside of Auckland, where house prices are lower, or for borrowers with a larger deposit.

Another risk Jones highlights is the fact that the average duration of outstanding mortgage debt (including floating) has fallen to around nine-and-a-half months.

"A full 77% of all mortgage debt is due to reset onto new rates over the coming year.

"Still, our forecasts, both for official interest rates and mortgage interest rates, point to only a gradual increase from here. Households have time. But fixing a greater portion of your mortgage seems prudent for those worried about higher interest rates over coming years. Mortgage rates for longer terms are higher than for shorter terms. But they are still very low relative to history and might be worthwhile given a borrower will be protected from higher rates for longer."

Jones says though that the higher debt burden households now have is going to give the Reserve Bank "more bang for its buck" when it does come time to lift interest rates. "This is likely to temper the pace of OCR hikes, all else equal."

The ASB economists calculate that a scenario in which mortgage rates lift around one percentage point to 4% would see an extra approximately $3.1 billion "sucked out" of mortgage-holder’s pockets annually.

"For reference, that’s equivalent to about 1.6% of total annual disposable income, or 3% of annual retail spending in NZ. So not immaterial. However, these numbers will overstate the impacts a little, as higher interest rates will obviously put cash back into the pockets of savers, who might feel inclined to spend more."

"It shows that the impulse from a change in mortgage rates usually goes on to impact house prices around six months later. 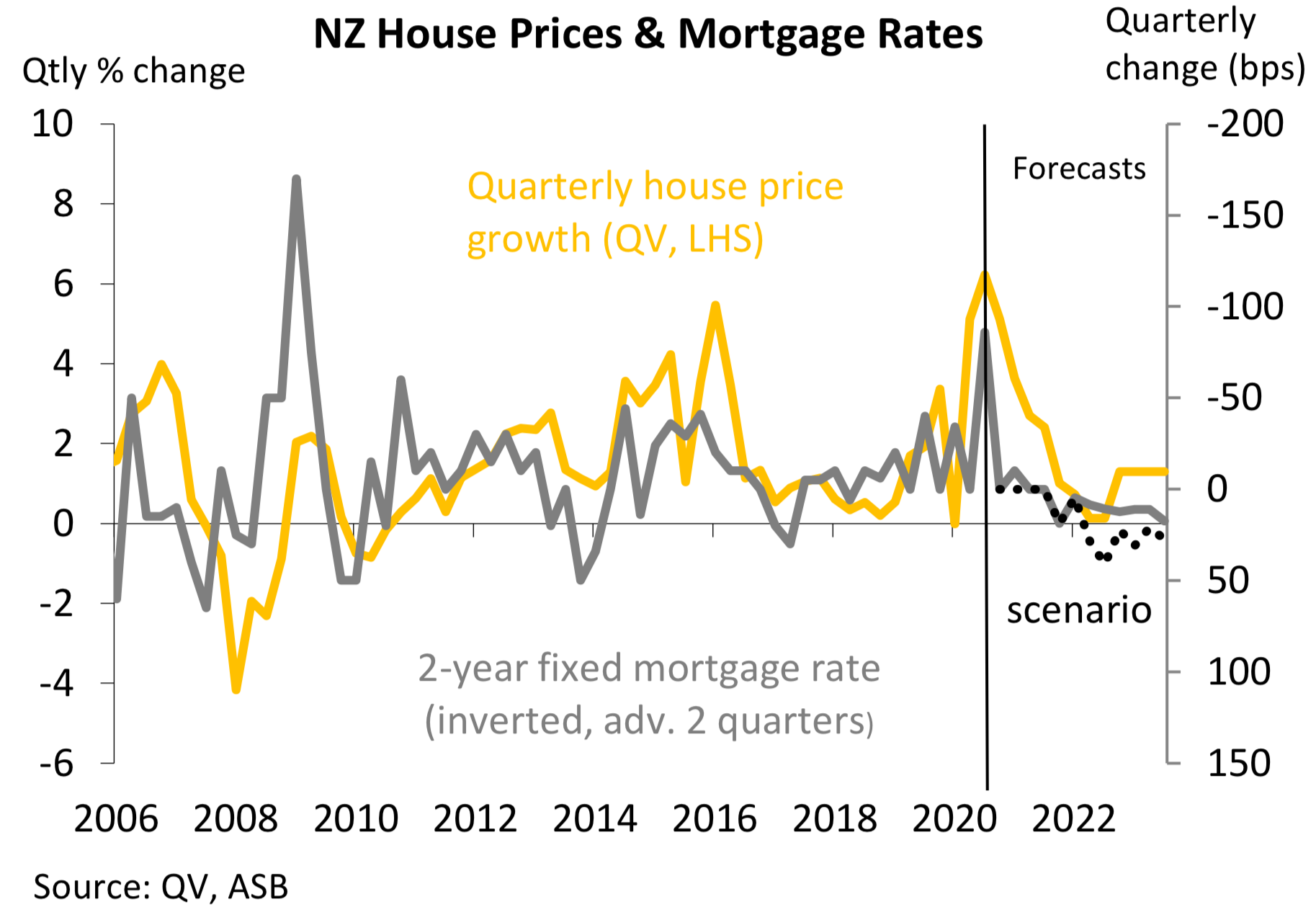 "The chart shows that a slow upward grind in mortgage rates over the next few years should, in the least, slow the rate of house price inflation. In fact, the model shows that, if anything, house price inflation could slow a little faster than we are forecasting (15% yoy by end 2021, 2% by 2022) based on our mortgage rate forecasts alone. A scenario in which mortgage rates rise faster than we’re expecting – to 4%, say, by end 2022 (the dotted black line) – would be consistent with some small quarterly falls in house prices."

Sure..just put off the family for a bit longer, hope for a wage rise, and of course smashed avo.

At some point we're going to run pretty hard up against biological constraints when it comes to the 'deferring families' bit - if people don't think it's a problem now then they ain't seen nothing yet.

Put the family off forever, its a far more environmentally friendly decision than any EV

Hopefully there hasn’t been any/much mortgage fraud whilst feeding the FOMO fire.

Do you mean offshore loans dressed up to look like income, dodgy valuations, inflated boarder/flatmate income and the like? Not sure how you expect anyone to get finance without making the application as strong as possible

Well, you see, if everyone played by the rules, then it would be easier to get finance if dodgy deals weren't inflating the asset market.

My understanding is that some, possibly many, banks no longer include boarder income. Similarly, offshore income can also be excluded. These factors may have played a role in dodgy lending in the 2015 boom, but it's not necessarily been a factor in loans recently.

Hmm I had to get 2 mates to sign a bank doc saying they were coming to flat with me at a certain rate per week before they would even consider giving me a loan. So they def take flat-mates into account (not sure about boarders though if we are differentiating)

you are kidding right...

its not called mortgage fraud..its called finding a good broker

Excluding those recent FOMO entrants it looks ok. I just caution the implied assumption that people will hold onto the mortgage until the stress rate. In reality people don't wait until they literally can't afford to pay the mortgage before they choose to sell. Maybe when it sucks up 60% of take home pay? 70%? I don't know but it's likely before 6.3% interest rate. When more people choose to sell their homes instead of buy one, we get price declines.

Basically, if you're going to panic, do it first. You don't want to be left holding the bag

yeah maybe home owners will suck it up...but will the specuvestors? Holding onto an 'asset' that no longer appreciates, that is making losses but taxed as if making profits might get a bit tiresome.

New Zealanders are some of the most hardy in the pacific. Don't expect anyone to sell unless some divorce and death come along. FHDs can continue their sweet slumber.

They have to say that, won't they ? Why create panic ? And affect their business ?