Westpac's head of NZ strategy Imre Speizer says the current rush to fix mortgages is likely to continue into next year, which will keep pressure on swap rates

Banking / news
Westpac's head of NZ strategy Imre Speizer says the current rush to fix mortgages is likely to continue into next year, which will keep pressure on swap rates 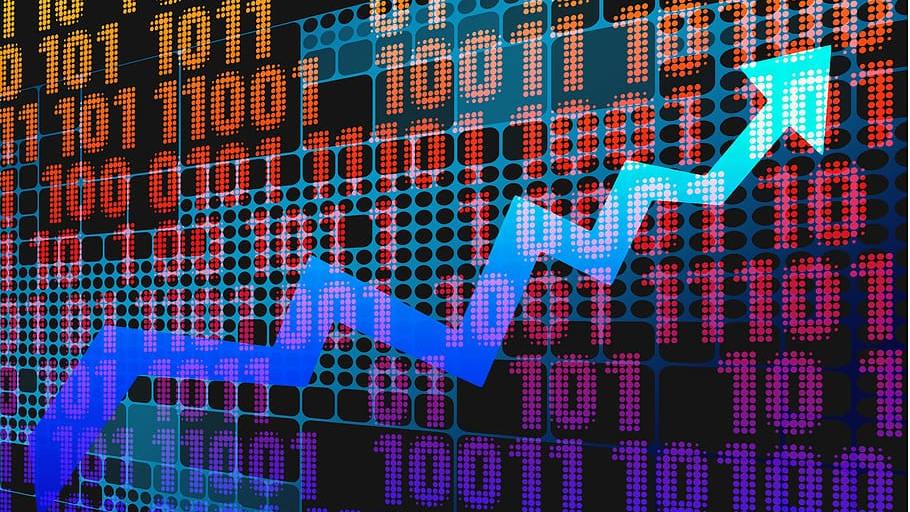 Westpac economists see further scope for more wholesale interest rate rises this year - despite the fact the rates have already increased a lot.

Very sharp gains in the wholesale rates have led to the banks beginning to strongly push up mortgage rates.

Kiwibank economists suggested this week that financial markets "have moved too far, too fast" and some of the shorter term rates will be "pulled down" again eventually.

Westpac's head of NZ strategy Imre Speizer said in an Outlook for Borrowers update that Westpac economists had said early this year they expected that NZ interest rates would rise further, "and that view remains, despite the large increases which have already occurred".

Speizer said the main developments over the past three months had been the Reserve Bank's start to the Official Cash Rate tightening cycle on October 6 and surprisingly strong NZ inflation and labour data. This had caused swap rates to rise significantly, with the 5 year rate rising by 105 basis points over this period.

He says market pricing for the RBNZ’s OCR is now well above that for the major central banks, which is likely to support the NZ dollar for some time. 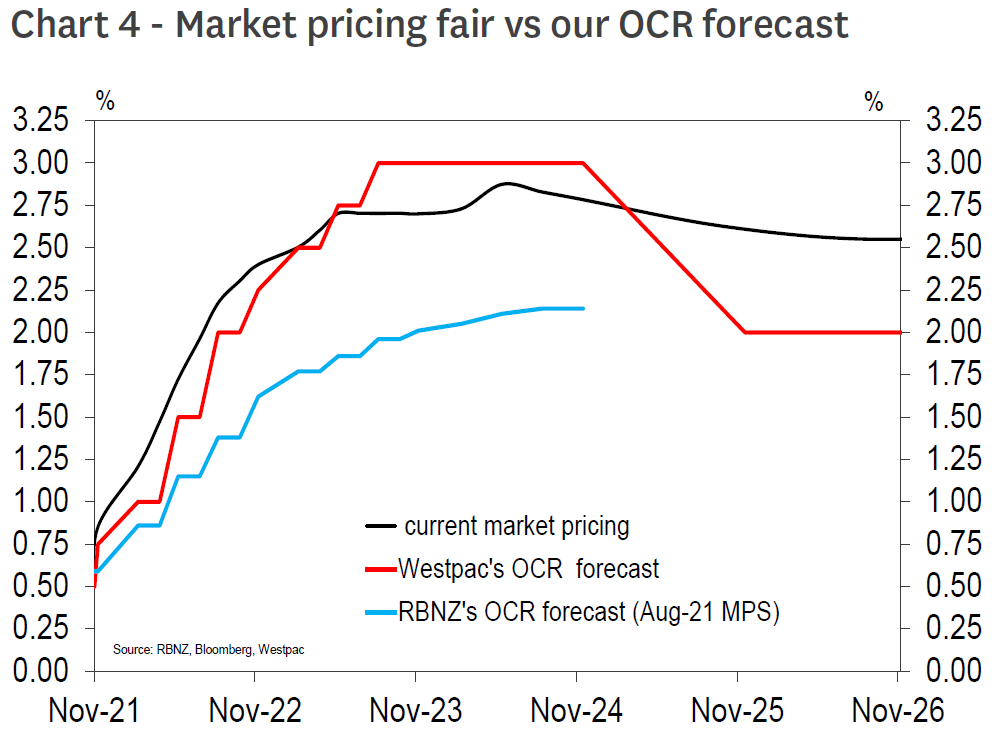 "...Rates at the very short end (next 12 months) have overshot our forecast, but rates between 1yr and 4yrs have scope to rise.

"Looking further ahead, there is potential for swap rates to rise further, although they are probably near a peak."

Speizer says that historically, following the first OCR hike, 5yr swap rates have continued to rise in three of the six tightening cycles since the OCR was introduced in 1999. 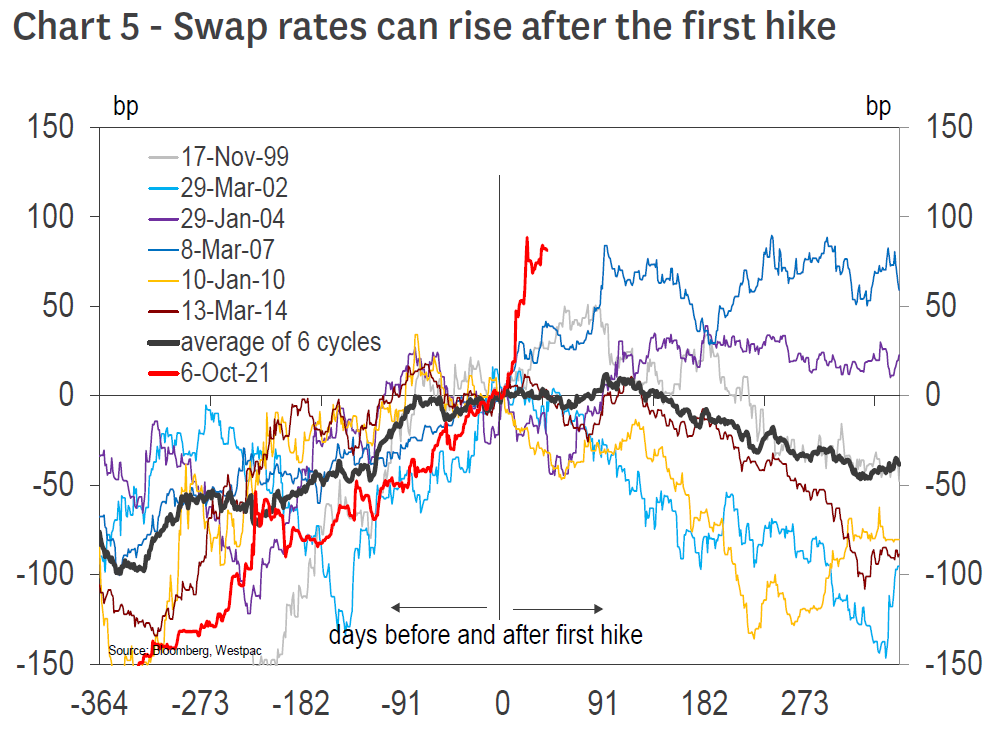 "In the current cycle, the rise in the 5yr has been eye-catching - the fastest on record. This at least warns that most of the gains in this cycle have probably already occurred."

As to why further gains in rates should be expected given what's already happened, Speizer explains: "First, mortgage fixing, which is a major source of paying flow in the swaps market, is likely to continue into next year. 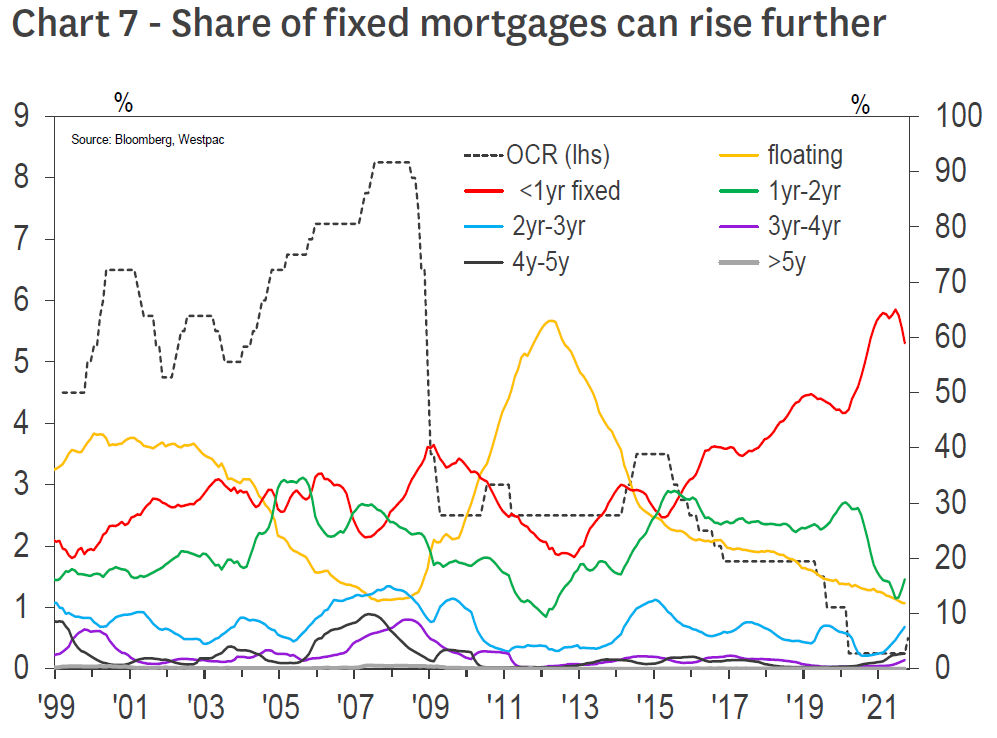 "The proportion of mortgages on fixed terms between 2yr and 5yr has started to rise, but as at the end of September (the latest RBNZ data available) it is well below the peak levels reached in 2007 and 2008.

"Based on the volume of fixing done over the past few months, there are at least a few months of significant swap paying ahead.

"Second, offshore yields, particularly in the US, could drag NZ swap rates higher. US traded inflation (for the next 10 years) has recently risen to a record high of 2.74%, with market sentiment skewed to the upside."

It'll be interesting to see if the fixed rates will rise above the floating.

Chart 7 is fascinating, people are predominantly fixing on very short terms. That's interesting because it implies that people expect that over the medium-term that rates will fall again.

Yup, I agree with these people too. I think rates will rise medium short term (18 months) then start falling again when the supply chain clears out.

Over the last 10 years the best strategy has been to fix for 1 year as rates have been falling. Now rates are going up the right choice could be changing but it's hard to predict the future. Looking at the graph, the point where fixes for 2+ years was the highest was in 2007-2008, and for most that would have turned out to be a bad choice, so no wonder people are keeping their loan terms shorter.

At this point, the home buyers do not care what the rate is. People just want to buy the house didn't matter what.

People are bidding at auctions with minimum bid of 50k when house is already at 1.5 millon. This is just crazy.

Does anyone know how long it takes to earn or save 1.5 millon on a salary lot higher than average salaries in NZ?

Are you a home owner ngk?

Swap rate is still very low comparing with where it was at on 2015...

I agree with Westpac. Rates have still potential for significant raises.

Moreover, it is just a question of time before offshore yields, particularly in the US, will start rising; and once they do so, they will inevitably drag NZ swap rates higher, regardless of the RBNZ's wishes.

The cycle of rising rates overseas has just barely started, and once all major central banks are not be able to pretend any longer that inflation risks are not present, they will be forced to act. In the UK, they already went very close to raising rates, and they are not hiding the fact that they are getting very nervous about the inflation risks; the European Central Bank, while not being hawkish yet, have started changing tone, and the mood in Germany is changing quite rapidly.

And once they start doing so, this will trigger a chain reaction of further rises everywhere.

Be ready to see mortgage rates not seen in years.