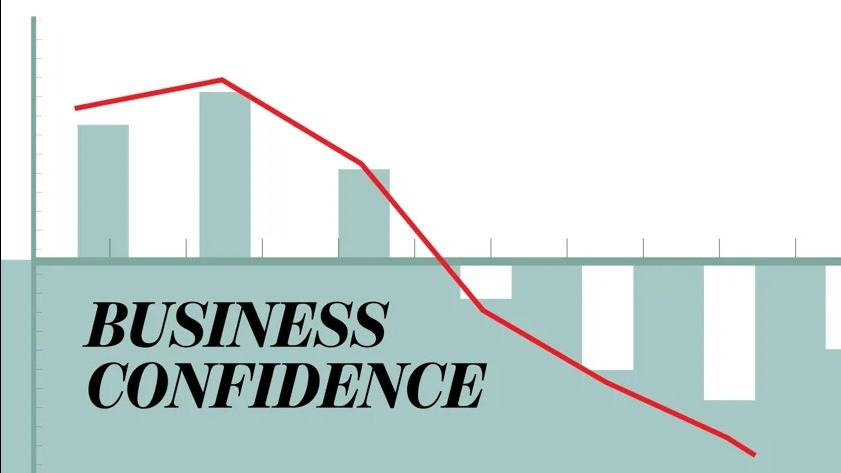 The Kiwi dollar plunged to record lows earlier last week of 0.6206 against the USD following very weak local business confidence surveys (as expected) and a weaker Aussie dollar on yet another interest rate cut by the RBA.

The NZD selling pressure proved to be very short-lived as short-sold NZD speculative position holders took the opportunity to take profits off the table and within two days the Kiwi had reversed back up to 0.6320.

Whilst the plummeting business confidence measures grabbed the headlines and caused an immediate negative reaction on the Kiwi dollar in the FX markets, a closer examination of why business folk are so negative on the outlook reveals that the gloom has nothing really to do with the performance of the economy or their businesses.

The NZIER quarterly survey asked an additional question as to the main reasons why the confidence and sentiment was so negative. Unsurprisingly, the major reasons were “Government policies”, “difficulty in securing labour” and “squeezed profit margins”. The economic commentary in the media that followed the lowest business confidence levels since 2009 was that the NZ economy was headed for a major slowdown and possible recession.

Such negative assessments do not stack up to scrutiny in my opinion.

Business confidence indices have been at very low levels for almost two years now, since the Labour Coalition Government came into power in October 2017.

However, the economy has not plummeted into the abyss through this period as the pundits have constantly predicted.

In the face of the global economic uncertainty from the China/US trade wars, the  NZ economy has, to the contrary, expanded by over 2.00% and looks set to continue that growth with export commodity prices remaining at high levels.

The residential property market did not crash badly and whilst retail profit margins are squeezed and manufacturing has weakened, the business confidence surveys have been completely inaccurate in foretelling future economic and trading conditions.

Business people really need to get over themselves, be a bit more honest and stop attempting to deliver political messages that they do not like a left-leaning Government when they fill in these survey questionnaires.

The US dollar could not continue its strengthening trend against the major currencies following the release of the weaker ISM manufacturing data for September.

The EUR/USD exchange rate has returned to $1.1000 from lows of $1.0900 a week ago. US employment data for September was a mixed bag with the increase in new jobs of 136,000 less than consensus forecasts, however previous months’ increases were revised upwards and the unemployment rate decreased to a new 50-year low of 3.5%.

Wages increases were again muted; therefore, the Federal Reserve seems likely to cut their interest rates again by 0.25% when they meet next on October 29th and 30th.

As anticipated, there is now further evidence that the  damage to the US economy from Trump’s import tariffs is spreading from the industrial/manufacturing sectors into the larger services and household sectors of the economy.

The US dollar has to date not depreciated on weaker economic trends and lower US interest rates, however that appears to me to be more about timing than a fundamental breakdown in cause and effect currency determinants.

Chinese and US trade negotiators resume their face-to-face talks on 10th October in Washington.

There has been a minor thaw in tension over recent weeks, however progress will be measured by reports of how much the two parties want a sweeping deal on addressing the US trade deficit with China, intellectual property theft and forced transfer of technology.

From a NZ dollar exchange rate movement perspective, three future scenarios are likely from the direction of the trade wars over coming weeks/months:-

Scenario 1 – Acrimony/Recession: The trade talks completely fall over as they did back in May, Trump imposes further tariffs, share markets plummet and the US/global economies decline into recession. (20% probability and the NZD depreciates to below 0.6000).

Scenario 2 – Slow progress/Muddle through: The best outcome is that the Chinese and American negotiators agree to talk again without agreeing on anything and we continue along the path of uncertainty of recent months. (40% probability and the NZD remains range-bound between 0.6200 to 0.6400).

Scenario 3 – Clear progress to a deal: The global economy avoids recession, equity markets lift, and FX traders sell out of safe-haven currencies (Yen, Swiss Francs, USD) and move back into growth/commodity currencies. (40% probability and the NZD appreciates back to 0.6700/0.6800).

Under “Scenario 3” above the current record level of “short-sold NZD” speculative futures positions are abruptly unwound, sending the NZD upward (refer chart below).

7/10/2019 Bloomberg :Trade talks - reports China will not consider negotiating some key US complaints

I am amused that Mr. Kerr places 2% economic growth in the positive column. The current government was forecasting 5% growth for this time period two years ago. Losing 3% P.A. growth is not a positive thing for business expectations.

Can you name a policy that would have caused this downturn in GDP? This government hasn't really made any significant changes have they?

".....as short-sold NZD speculative position holders took the opportunity to take profits off the table......"

Yes Roger, too true! Our NZD is truly in the hands of global currency speculators whom the likes of Roger and bank economists work hand in glove with, manipulating currencies more than traditional market influences.

The only remedy is to fix the currency without warning anytime these parasitic manipulations become too influential; this will burn them off.

Decisions are usually made but not immediately implemented so confidence surveys tend to lag actions. Its irrelevant if Govt is left or right the relevance is policies and that's the problem - rig the field against Landlords/Oil industry/Small business/Farmers and expect them to lose confidence which causes uncertainty so inaction, of those affected - initial situation we appear to transiting through, without fundamental change decisions will be implemented by some and their effects will be increasingly felt.

It's a lack of leadership that's letting us down. The kids are running the cutter & it looks like it. Oh well, there's only one way for them to learn. They certainly won't listen to their elders.