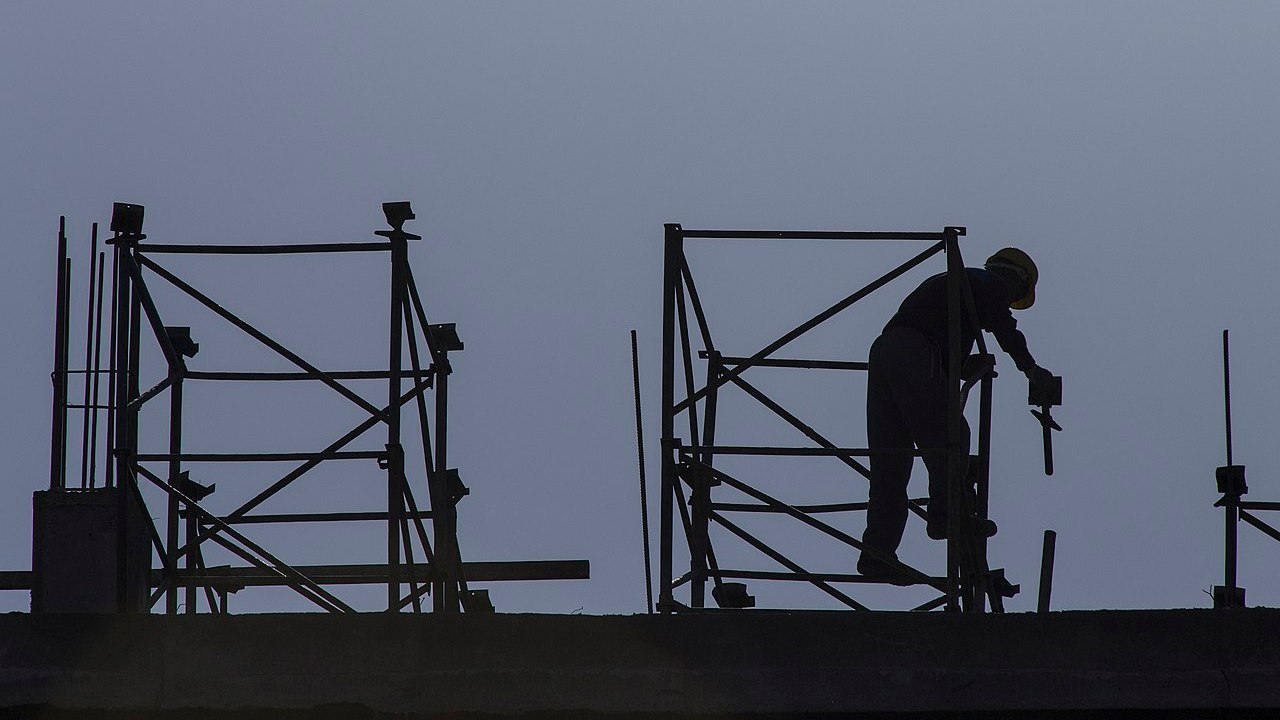 TOP OF THE POPS: Construction has been a standout in the New Zealand economy.

After the wild ride our economy went on in the previous two quarters, GDP figures for the December quarter to be released this week (Thursday, March 18) will show a return to relative stability. But as ANZ senior economist Miles Workman puts it: "There is still plenty of noise under the hood."

To refresh memories a little; for the March 2020 quarter New Zealand registered a -1.4% drop in economic activity as the chill winds of Covid started to blow strong on us.

And then in June came the historic lockdown-induced -11% plunge in GDP. Spectacular as that plunge was, it was actually a much smaller drop than many economists had earlier expected - with figures of -20%+ being suggested at one stage.

Then as the economic oven was turned on again (and warmed up faster than many expected) there was an equally historic +14% rise in GDP.

Our recovery from lockdown surprised everybody with its strength and the ongoing relative strength of the economy since has continued to surprise.

So what of the December quarter?

For December the Reserve Bank's forecasting GDP movement of exactly zero, IE, of 0.0%.

That puts it right down the middle in terms of economists' picks with some picking a small rate of growth, and some a drop.

If the zero figure for the December quarter came to fruition this would mean that NZ eked out an annual growth rate of 0.3% for 2020.

Other economists are quite mixed in view between whether there was some growth again in GDP in the December quarter, or whether the economy went back into reverse.

Here's ANZ's Workman again: "Forecasting GDP hasn’t got any easier as the impacts of lockdown abate. We’ve pencilled in modest growth of 0.5% q/q, but wouldn’t be surprised to be surprised on the day. Our indicator models produced a plausible range of -2% q/q to +2% q/q."

Workman's pick of 0.5% quarterly growth would give an annual increase of 0.7%.

He says the latest data will show some industries struggling; some doing well but recoiling from a pent-up-demand-driven “overshoot”in Q3; some industries gradually recovering; and some trucking along like lockdowns and closed borders never happened.

"We expect to see ongoing divergence across industries depending on their exposure to housing-induced domestic demand and international tourism.

"The annual percent change will provide the best indication of how each industry is holding up compared to the good old days before Covid-19. Construction is expected to be top of the pops (up around 8% y/y), followed by health care and retail trade (up around 5% y/y). Looking forward, the scope for these industries to support headline growth will be limited by capacity constraints (via both imported goods and labour).Conversely, transport, postal and warehousing is expected to be the relative under-performer (down over 20% y/y), dragged down by air transport. That’s something that’ll continue for as long as borders remain closed.

"All up, it’s extremely unlikely that Q4 GDP will challenge the narrative that New Zealand’s rebound from lockdown has been very impressive –even if the data surprise us with a small negative q/q read (which we’d put around a 30% probability on).Ultimately, it’s all going to come down to whether or not the housing impulse has more than offset the start of the non-existent international tourist season–but revisions to history could be just as material.There’s also a non-trivial possibility that Q4 marks the beginning of a technical recession (after all, Q1 is peak international tourist season), but again, recession is a growth concept and NZ is still operating at a relatively high level (in aggregate) given everything we went through in 2020."

Westpac senior economist Michael Gordon has estimated a 0.3% decline in GDP for the December quarter.

"That would leave it about the same level as a year ago, and more significantly, about 3% shy of where we would have expected the economy to be if Covid-19 hadn’t happened. The more domestically focused sectors largely held their ground, but retailing and hospitality in particular saw a substantial pullback from their September quarter levels as the lack of international tourists hit home."

He says Westpac's forecast "is a bit stronger than our early estimate of a 0.7% decline".

"But at the same time, it’s looking more likely now that we’ll see a second consecutive drop in the March quarter. To be clear, that does not imply a second recession. We’re still in the same downturn that began a year ago, coupled with a disruption to the usual seasonal patterns of activity. The flipside of this is that growth will look stronger than usual during winter, when there would normally have been a net outflow of people from the country. We’re currently forecasting a 1.9% increase in GDP for the June quarter."

ASB senior economist Jane Turner says it appears NZ GDP growth may have stalled over Q4, after an impressively-strong rebound in Q3 which saw NZ GDP recover to its pre-pandemic level in just one quarter.

"We now expect Q4 GDP contracted by 0.1%, with the quarter’s GDP just 0.1% above year ago and pre-pandemic levels. That would mean annual growth slowed from 0.4% in Q3 to 0.1% in Q4. Our forecast is only slightly softer than the RBNZ’s February MPS forecast of zero Q4 growth."

"A key reason for weaker growth is the absence of the usual number of overseas visitors, meaning accommodation and hospitality spending did not enjoy its usual seasonal lift. In saying that, there are still a few international visitors lurking about in NZ. There are those who chose not to leave during the pandemic. And there is the large share of arrivals into NZ via MIQ who indicate they do not intend to stay in NZ for more than a year, and therefore are not counted as permanent migrants.

"In addition, there has been some offset: domestic spending by households has been quite strong, particularly over the holiday periods (i.e. the Christmas and New Year’s Day break, and Waitangi Day). Also providing offset for the economy is that the construction sector is absolutely booming. The housing market remains chronically undersupplied, and low interest rates and strong housing demand have stimulated housing construction appetites. Consents for non-residential activity have also remained very strong – so we expect the Q4 dip to be quickly reversed in Q1.

Turner says the overall picture for 2021 remains one of muted growth, but prospects for 2022 have improved.

"The labour market and household income growth have held up relatively well and that’s a key positive for the NZ economy this year. But a lot of NZ’s GDP growth over recent years has come from population growth (net migration) and, with borders closed until the end of the year, weak population growth will limit the degree of economic recovery.

"Nonetheless, the end is in sight. Vaccination is underway in those countries most acutely impacted and early data on the efficacy of vaccines has been promising. For NZ, just this past week we have received clarity on NZ’s vaccination plan (with general population to get vaccines from July!). Furthermore, with vaccination of border workers in progress the risk of further Covid-19 border breaches has been materially reduced. From this point on, businesses should become more confident on the outlook and look to take action on employment and investment plans over the coming year."

"The underlying data are expected to be a combination of industries experiencing some payback following a phenomenal rebound, and those that continued to recover. For instance, already released partial indicators suggest a pullback in construction and retail activity following a 52% and 43% bounce back in Q3 respectively. The latter may have also experienced some pain from supply-chain disruption that delayed goods imports at our major ports. In contrast, the transport sector is picked to post a 5.1% quarterly rise. But even with this increased transport activity, output would still remain around 30% below pre-covid levels. Perhaps an unsurprising result given a closed border drastically culled international travel," the Kiwibank economists say.

"Looking ahead, the first quarter of 2021 will probably see a fall in GDP as the closed border hammers industries reliant on foreign visitors. On top of the border restrictions was of course the two Level 3 lockdowns in Auckland. But the near-term bumps are expected as we navigate the covid crisis, and we are looking through near-term weakness. Barring a prolonged lockdown due to a major covid outbreak, the NZ economy is now on a recovery trajectory."

"a lot of NZ’s GDP growth over recent years has come from population growth (net migration) and, with borders closed until the end of the year, weak population growth will limit the degree of economic recovery. Nonetheless, the end is in sight."

More of what doesn't work for the long term benefit of the country then?
Just import more and more mouths to feed, cloth and house and assume they will never age; fall ill or become idle, and draw on the social safety-net that our country provides. As they inevitably will, then what? Of course! Keep doing it....
Madness....
How about we actually start utilising those we have here already, first?
New Zealand doesn't need more lowly paid immigrants. It needs less.

Yeah, change the graph to growth per capita and it does not look that flash.

All is good, property prices are going up 100K on an annual basis.

Property price increases are not included in GDP.

There is some proxy through 'Owner-Occupied Property Operation' third biggest industry contribution to NZ GDP.

"Owner-Occupied Property Operation" has nothing to do with increases in property prices. If it did GDP would be through the roof.

Perhaps you would care to define what "Owner-Occupied Property Operation" is before saying that.

I know what it is, but I don't think you do.

How about you explain why you think it is a proxy for house price increases.

Simple, because it is entirely derived using a formula starting with property values.

It is not derived, rather apportioned.

How can we have a YOY 0.4% growth in September when a significant part of our economy which used to be about 15% was totally closed? Makes no sense.

New housing loans. This funds the construction, owner-occupier property operation, rental hiring and real-estate and other areas of our economy.
See gypsymanz link.

GDP is so flawed, we can call it a lie. It measures no stocks (so no draw-downs), no remaining sink capacities, and fails to differentiate between good and bad social outcomes (the Chch earthquake was good for GDP - says it all).

How much debt - Govt and private combined - was issued in the same period?

Can you do a piece on those issues please David?