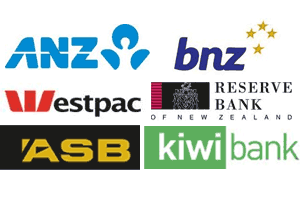 As the country's senior bankers drift back from their summer holidays they'll find little has changed since they called time on 2011 and left the office before Christmas.

The international financial and business news headlines are still dominated by the seemingly never ending European sovereign debt crisis. And with most of the bankers based in Auckland these days, it'll probably still be raining.

Here's a look, in no particular order, at five banking sector issues we'll probably hear plenty about in 2012.

A key area of focus for anyone with a floating home loan or one fixed for less than a year. And there are plenty of us. Based on the latest Reserve Bank figures, NZ$143.053 billion, or 84%, of the country's total NZ$170.610 billion worth of mortgages are floating or fixed for terms of less than one year.

The main question here is, if the OCR remains at its record low of 2.5% late into 2012 as many economists predict, or even into mid-2013 as the New Zealand Institute of Economic Research suggests, will the major banks, usually rising funding costs as an excuse, hike floating mortgage rates anyway?

One CEO who has strongly hinted this will happen is the BNZ's Andrew Thorburn. Meanwhile, ANZ has made waves across the ditch by moving to monthly announcements on its interest rates independent of both the Reserve Bank of Australia and its competitors. ANZ New Zealand won't be doing the same. However, it and all the major New Zealand banks support ANZ's view that their funding costs aren't determined by the OCR, with Thorburn saying the two have always been "decoupled."

If the banks do hike their floating mortgage rates despite the Reserve Bank leaving the OCR unchanged, will our senior politicians follow in the footsteps of their Australian counterparts and publicly attack the banks?

In a stubbornly weak domestic economy, where customer deleveraging has been a feature over the past couple of years, will the banks be able to grow their lending books? One bank CEO, SBS's Ross Smith, has suggested a flat lending book is viewed by many as growth these days.

The Reserve Bank's latest sector credit figures - for the year to November - show agriculture debt contracting by 0.9% to NZ$47.376 billion, business lending growing at 2.6% to NZ$73.470 billion and household debt, including housing and consumer loans, rising just 1% to NZ$184.666 billion.

And will recent trends of ANZ and ASB contracting their books and BNZ, Westpac and Kiwibank growing theirs continue?

Cutting costs seems to be back in vogue with the country's biggest bank, ANZ, trimming operating expenses by NZ$44 million, or 10%, to NZ$384 million in the September quarter. The Reserve Bank warned banks in its November Financial Stability Report not to go too far. It said although it's appropriate to focus on cost containment during the current period of weak lending growth, they shouldn't cut costs to a level where they're exposed to "greater" operational risks.

Sydney-based UBS banking analysts suggest the days of staff cuts and branch closures could return at the big Australasian banks as they're now "structurally challenged" with the tailwinds of a leveraging economy driving strong balance sheet growth, readily available funding, fee hikes and rallying markets all having run their course.

This is a topic we'll hear a lot about from the bank bosses. The European debt woes have put the heat on offshore wholesale funding markets where the big four banks - ANZ, ASB, BNZ and Westpac - get around a third of their funding.

Three of their Aussie parents have issue covered bonds, supposed to be a cheap source of funding for the banks, during the holiday season paying investors' interest rates that won't thrill the banks.

According to Bloomberg ASB's parent Commonwealth Bank of Australia and BNZ's parent National Australia Bank paid about 100 basis points more than premiums on senior unsecured debt issued mid-year when they sold a combined €2.5 billion worth of five-year covered bonds secured by home loans earlier this month. The Australian Financial Review reports that, after hedging the proceeds, CBA and NAB's costs all up were between 210 and 220 basis points over the Australian bank bill rate, or 6.6%. ANZ's were 240 basis points over the bank bill rate, or 6.85%.

Still, there are arguments the rise in funding costs is being over played by the banks. Deutsche Bank analysts argue none of the big four Australasian banks need to borrow more than A$12 billion (NZ$15.5 billion) from overseas wholesale money markets during their 2012 financial years, which should be manageable given their strong credit ratings and other borrowing options available including issuing domestic debt, commercial paper and raising retail deposits.

The four Australian owned banks have market dominance in New Zealand the like of which is seen in few other economies. They account for nearly 90% of the banking sector, or just over 70% of the financial system as a whole. In their last financial year they made a combined net profit after tax of NZ$2.778 billion. That's NZ$78 million, or 3%, higher than their combined profit in the boom year of 2007 when double digit lending growth was the norm. Both ANZ and ASB's 2011 financial year profit hit record highs of NZ$1.085 billion and NZ$568 million, respectively.

Driving this profit growth has been fattening margins on loans and tumbling impairment charges on bad loans. See more on this here.

You can keep tabs on the banks' margins here where the Reserve Bank monitors them.

This article was first published in our email for paid subscribers yesterday morning. See here for more details and to subscribe.

Just keep an eye on the yeild curve.  That should give a fair idea of how things are going.

Whats to stop banks "coupling" to the RBNZ OCR?  With all the financial engineering, and accounting gimmicks out there, that should be a no brainer.  If the OCR has no impact try cutting it to 0.1% and see what happens.

Making interest rates so low, which is the opposite of where they would be in a free market, with such a derth of savings, has destroyed the cost of capital.  When you destroy the cost of capital, you destroy the respect for capital.  Bi-polar govt want to encourage saving, so it reduces interest rates.  No-one wants to own money when the interest rates are so low.   The anti savings policies, are totally disconnected from the savings rhetoric.  The biggest crime in history was making money capital in the first place but thats a different rant.

Notice the 90 Day bill rate has been moving upwards over summer. Is this an indirect indicator for mortgage rates?

One strategy for 2012 may be to fix separate loan segments every 2 or 3months for one year Then you spread the risk a little - and push the fixed segment/s out continually. And you can fix for 12 months at rates below floating atm.

Wonder what happens to worldwide rates once FED monetises MBS's??

I think we are going to have a bank failure this year...which one is a guess...but the most overleaveraged would top the list of maybes.

What do you mean by 'failure'?

If they're all betting correctly that their too big to fail, then none of the banks will fail will they? Rather the regulators would be deemed to have failed.

That's a fair point...a failure is what?...I would deem a freeze on deposits and on private bank shares to be a failure..that's what Bollard plans to set up...midnight decisions and morning brings the news of the action taken..this is what Piggy did with the PSIS..

This is the replacement for a govt guarantee over say $100,000

The consequences remain unknown...the assumption is the taxpayers are saved a bailout of depositors...but with the first OBR action will come an exodus of cash from every other bank.

The warning signs are leaverage and a burst of advertising to attract deposits. One thing you can count on, the bank bosses will know dam well which bank is close to being toasted.

"ANZ Bank is expected to cut hundreds of Australian jobs in the first half of the year, as it seeks to cut costs in a weaker lending environment." stuff.co

Does anybody know if and whe  heartland will be applying for a banking lisence.

When they shed ties to George Kerr and co they might bbe more acceptable to more kiwis.

They have dialogue with the RBNZ underway, as Jeff Greenslade put it a while back...

The Australasian banks are in fine fettle ....... there'll be no failures in this part of the banking world .....

... relax my nervous Nellies ...... gosh , you lot are all of a tiz-wold , and the brushbeater of doom Bernard Hickey isn't even here to fan the flames of your panic !

Isee that U.S. home loan rates for 15 and 30 years are at record lows.

Can us kiwis get a slice of the action and if so how can we and what are the pitfalls.

Not sure on the detail, but I'm sure it could be done. You would want to watch exchange rate issues though. An Aussie mate of mine who lives in Japan borrowed money in Japan, probably 4-5 years ago, to buy a house in Australia. I'll drop him a line and check out how it has played out...

..... was it in the 1980's that many Kiwi farmers accepted the benefits of lower interest rates on loans designated in Swiss francs .... only to be wiped out just a few years later by the turn of the economic crank , when the local economy stank  , and the  Kiwi dollar sank .... ?

You can bank on the franc !

Just returned from Texas and mortgages are at 2.99% fixed 25 years.