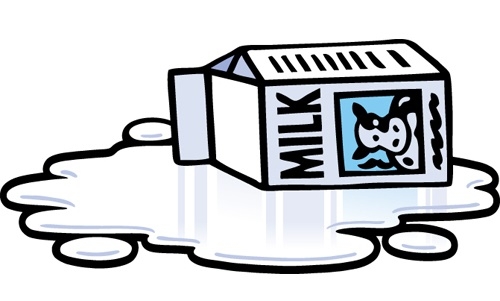 BNZ's economists have taken the scalpel to their forecast milk price for farmers for the second time in a week, cutting their prediction to $3.80 per kilogram of milk solids from $4.30.

The economists previously cut their forecast from $4.70 just last week in response to a disastrous GlobalDairyTrade auction, in which prices fell 10.7% - the ninth consecutive fall and the biggest drop in over 12 months. Prices are now at 13-year lows.

The new forecast from the BNZ, which does incorporate some expected recovery in prices globally late this year, brings it into line at the bottom end of predictions with the ANZ ($3.75 to $4).

Fonterra's opening forecast for the season is $5.25, with the next scheduled opportunity to review it being the board meeting on August 7. There is speculation in the marketplace, however, that it may well be reviewed before that.

BNZ senior economist Doug Steel said the BNZ's new $3.80 figure represented "our best estimate of the middle of a very wide range of potential outcomes when the season’s figures are finalised in over 12 months’ time".

The forecast was underpinned by wholemilk powder (WMP) prices remaining weak in the near term before approaching US$2,500/T by mid-next year.

Steel said given the considerable uncertainty at present, it was useful to look at alternative scenarios based on WMP and what these might mean for the 2015/16 milk price. "In addition to our forecast, we look at three alternatives: no change from here, a downside scenario and an upside scenario."

The chart below shows these WMP price scenarios and the associated indicative 2015/16 milk price. It is also gives an indicative start point to the 2016/17 season if prices evolve as defined under these scenarios (along with other assumptions) to the start of that season. 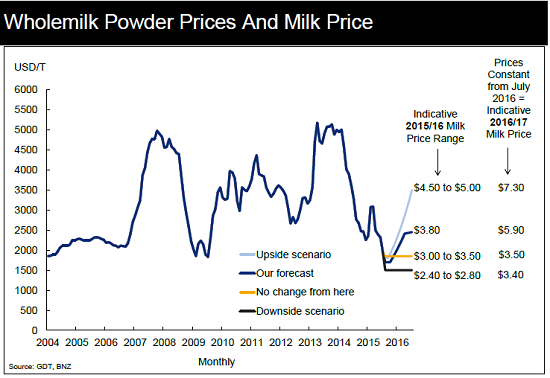 These are the three scenarios the BNZ economists outline:

This scenario assumes prices remain at the mid-July auction’s level for the entire season (as if world prices would ever sit still for a year!). Given the other uncertainties including the exchange rate, we estimate this would give a 2015/16 milk price in a range of $3.00 to $3.50.

This scenario assumes further declines in WMP prices to US$1,500 in the near term and no recovery over the season. Such a scenario may involve an economic stumble in China denting dairy demand, lower oil prices, a further extension of the Russian trade ban, large EU production post-quota removal, weak underlying prices engaging EU intervention buying that delays price recovery, strong US milk production via lower grain prices, and/or favourable weather. The NZD would be expected to decline further under such conditions, but even so and given the other uncertainties, such an international situation would give a 2015/16 milk price in a range of $2.40 to $2.80.

This scenario assumes price stabilisation initially and then solid gains in WMP to US$3,500 by the middle of next year. Such a scenario may involve some combination of a prompt and large return of buying from China, strong lift in oil and grain prices, a severe El Nino denting milk production, removal of the Russian trade ban, or major weather event in a major milk producing area. The NZD would be expected to be firm under such conditions, but even so and given the other uncertainties, we estimate this would give a 2015/16 milk price in a range of $4.50 to $5.00.

Steel said while the latter scenario may seem unlikely given current weak conditions, "we note that in the three dairy price cycles within the past 10 years WMP prices have essentially doubled within a 12 month period".

"Is it darkest before the dawn at present?"

"How much depends on many factors, including the co-op’s view on where dairy prices track over the coming 12 months. One thing is for sure. There is plenty to consider."

Didn't we get it from the second biggest milk processor earlier in the week? Courtesy of CO.

Open Country had until last week been forecasting a milk payment of $4.75-4.95kg milksolids to its around 700 national supplier farmers.