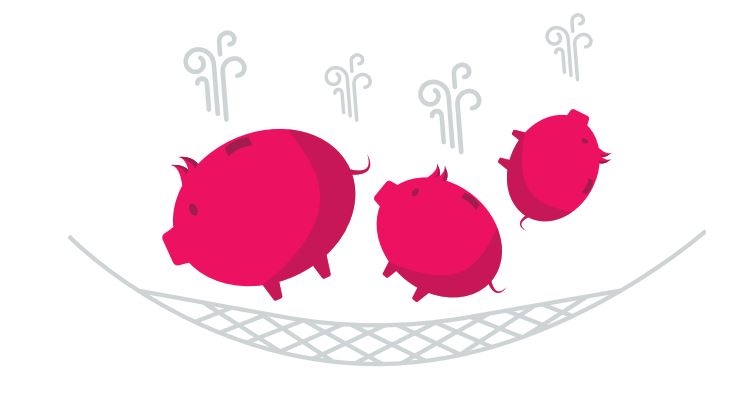 This Thursday, 356 days after the Reserve Bank (RBNZ) stunned the banking sector with both the size and nature of its proposed increases to banks' regulatory capital requirements, the RBNZ will unveil its final capital review decisions.

It's the culmination of the RBNZ's broadest ever review of bank regulatory capital requirements which kicked-off way back in March 2017. Overall the RBNZ proposals would require banks to increase their regulatory capital by about $20 billion over five years.

So without further ado here's a summary of the key changes the RBNZ has proposed.

1) Levelling the capital playing field between the Aussie-owned banks and the rest.

The Aussie owned banks use what's known as the Internal Ratings Based (IRB) approach to credit risk measurement and other banks use what's known as the standardised approach. ANZ, ASB, BNZ and Westpac, except for a couple of recent RBNZ interventions, set their own models for measuring risk exposure which they must then get approved by the RBNZ. In contrast all other banks use the standardised approach and have their credit risk prescribed by the RBNZ. This effectively means the big four can stretch their capital further, boosting profitability.

The RBNZ is proposing to make the big four banks increase the assets they use to determine the minimum amount of regulatory capital they hold to the equivalent of 90% of what's held by other New Zealand banks, up from about 76%.

This follows an RBNZ probe of the big four banks' use of the IRB approach to credit risk showing them with risk weighted assets (RWA) equivalent to 69% of the standardised approach for residential mortgages. And across all types of lending combined, ANZ, ASB, BNZ and Westpac were between 67% and 86% of the comparable standardised calculations, with an average of 76%. Risk-weighted assets are used to determine the minimum amount of capital that must be held by banks to reduce the risk of insolvency. The capital requirement is based on a risk assessment for each type of bank asset. There is considerable variation both across different types of loans and across IRB banks.

The big four banks account for 86% of bank lending and a similar percentage of deposits. 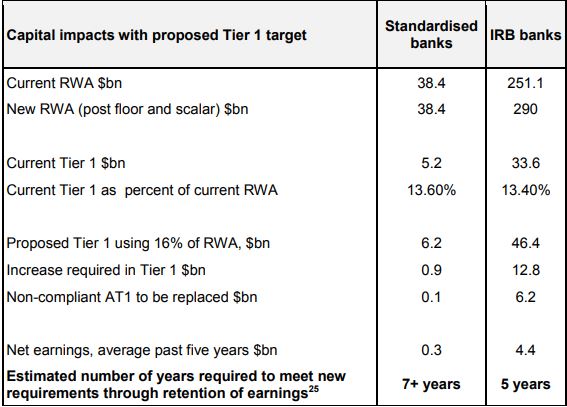 2) Increasing capital requirements as a percentage of risk-weighted assets.

Here the RBNZ proposes an increase from 10.5% to 18% for the big four banks and 17% for the rest as demonstrated below. Note, these figures includes so-called Tier 2 capital of 2%, and the RBNZ has "raised the question of whether Tier 2 should remain in the capital framework."

Proposed capital ratio requirements, as a percentage of risk-weighted assets 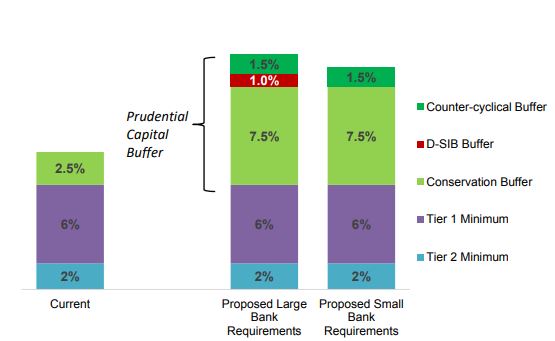 This means ANZ, ASB, BNZ and Westpac would be required to hold more capital than other banks. The RBNZ proposes to designate the four as systemically important banks because they control the vast majority of NZ banking system assets and liabilities. This is effectively an insurance policy over and above the capital requirements other banks face. This is because the big four are so big the demise of one or more of them would have very serious consequences for the entire economy.

4) Changes to the composition of bank capital, including a ban on the use of contingent debt as regulatory capital.

The Reserve Bank's proposals are based on increases to Common Equity Tier 1 capital’ or CET1. This is a subset of Tier 1 capital and consists of ordinary shares, retained earnings and some reserves. Banks are currently also allowed to use Additional Tier 1 capital, or AT1, and Tier 2 capital.  AT1 is capital instruments such as preferred shares that are continuous given there's no fixed maturity date. Tier 2 capital mainly consists of long-dated subordinated debt.

The proposed changes would see a minimum Tier 1 capital ratio of 16% for the big four banks and 15% for the rest, comprised of CET1 capital and AT1 that meets proposed new requirements. The RBNZ proposes to ban contingent debt from qualifying as regulatory capital. If it sticks to its guns on this decision, it means only non-redeemable preference shares and common equity will be options under the revised standards.

Contingent debt is debt that writes off or converts to ordinary shares when a pre-specified event, related to the issuing bank's financial condition, occurs. A significant volume of this debt has been issued to NZ retail investors even though the Financial Markets Authority warns it may not be suitable for many investors.

If the RBNZ sticks to its proposals in this area, $6.3 billion of AT1 capital will become non-compliant and require replacing.

5) The RBNZ's capital proposals make the explicit assumption that New Zealanders aren't prepared to tolerate a system-wide banking crisis, and its adverse economic and social impacts, more than once every 200 years.

This was a key factor behind the proposed capital increases with the RBNZ acknowledging it lacks evidence about New Zealanders’ tolerance for banking crises. The one in 200 year assumption was thus "accepted as being a reasonable approximation, in the absence of any information to the contrary." A lengthy cost-benefit assessment of the capital proposals is also due to be released on Thursday.

6) The RBNZ has proposed a five-year transition period for banks to phase in the new requirements.

Although not strictly a proposed change per se, this is an important decision as it defines how long banks will have to adapt to the new requirements. In an interview with interest.co.nz in February Reserve Bank Governor Adrian Orr said the proposed five-year timeframe was "plucked out of the air" and some banks could potentially have more time. Banks are thus expecting they could get seven, or even 10 years in the final decisions.

Will the final decisions change much from the proposals?

Banks, and others, have lobbied hard for changes to the RBNZ proposals. However the RBNZ doesn't appear minded to make too many changes based on comments sprinkled through its Financial Stability Report last week. For example, under the headline 'Higher bank capital will improve long-term resilience,' the RBNZ said;

"Capital is the equity funding that is provided by bank shareholders. Strong capital positions are important, as it provides a buffer for banks to absorb unexpected losses without threatening their ongoing viability. Currently banks hold sufficient capital to withstand a range of economic risks. However, their viability may be threatened if very severe events were to occur. Bank failures can cause very large economic and social costs, and to improve resilience we have proposed increasing capital requirements for banks. Under the proposed changes, we believe banks would be able to withstand the kind of event that occurs about once every 200 years."

However the RBNZ is likely to give some ground. One area noted above is the potential lengthening of the five-year timeframe for them to transition to the new capital requirements.

In a combined submission on the RBNZ proposals Kiwibank, TSB, SBS Bank and The Co-operative Bank argued AT1 and Tier 2 capital should at least remain available to small banks with AT1 instruments callable.

The RBNZ has been working with these banks on developing a suitable Tier 1 capital instrument.

And BNZ chief financial officer Peter MacGillivray recently told interest.co.nz there appeared to have been "a softening" from the RBNZ on its stance on AT1 capital. MacGillivray said BNZ was hopeful the RBNZ would allow banks to issue an AT1 capital instrument that's marketable externally.

"As the current proposal stands the instrument has probably only really been able to be supplied by our parent [National Australia Bank, or NAB]. So we're really looking for an instrument in the AT1 bracket that we can issue directly under the Bank of New Zealand name," MacGillivray said.

If the RBNZ doesn't cede some ground a legal challenge is not beyond the realms of possibility. A report commissioned by bank lobby group the New Zealand Bankers' Association (NZBA), heavy on criticism of the capital proposals, argued the potential benefits of appealing prudential regulatory decisions on their merits are large. Asked by interest.co.nz about the potential for a legal challenge in September, NZBA said; "We can’t comment on a hypothetical question before we know the outcome of the review.” 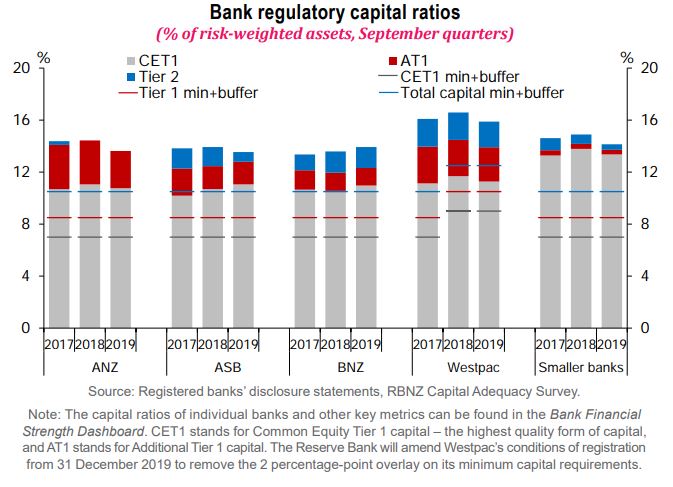 How do these proposals compare with the provisions for large banks in other western countries ?
Is RBNZ trying to catch up with others or is it trying to be a pioneer in introducing better measures to meet future adversities ?

The RBNZ is proposing both higher capital requirements than are in place in comparable countries, and higher quality capital too.

Higher quality is certainly good, no dispute. Higher amount is also good, within reason. All for the good of the economic health of the country.
Who knows, other countries may follow suit.

Given the results of bank behaviour we've seen in comparable countries this seems like a good thing.

Interesting article Gareth,do you have any information on how it will effect my lender Rabobank.

You can see Rabobank's submission here - https://www.rbnz.govt.nz/-/media/ReserveBank/Files/regulation-and-supervision/banks/capital-review/submissions/P-to-R-Capital-Ratio.pdf#page=13 And there are some comments here from RBNZ Governor Adrian Orr and Rabobank's CEO Todd Charteris that are relevant - https://www.interest.co.nz/rural-news/101973/shifting-head-office-hamilton-wellington-will-take-key-rabobank-staff-closer-their

If I buy Tier 2 debt and the bank gets into trouble I know my investment is at risk. Why does the RBNZ need to specify this type of issuance is unacceptable when it is abundantly clear to investors where you stand.

The RBNZ either don't understand how these notes work (and Mr Bascand has form with Kiwibank) or they don't believe investors understand the risks..... in which case they should be discussing with the FMA about the need for greater disclosure.

Killing Tier 2 issuance will only serve to hollow out the NZ capital market even further.

The stated 1/200 year "event" implies that there's a 0.5% chance of an adverse event happening each year, or stated another way, there a 99.5% chance that each passing year will be uneventful. That means there's a 0.995^10 = 95.1% chance of 10 consecutive uneventful years, the time it will take to build up the additional Tier 1 capital buffer. These assumptions of benign risk are wildly optimistic in the current global context. I agree with the RBNZs proposals but I doubt they'll be implemented in time to save us from a government bail out.

Hardly being heard/toned down/torpedoed by Nat co. - as most of those RBNZ concerns (like the DTI flip-flop remember?) - Now this one, another two days. But what would it be? the following next story chapter .. if it's back under the blue?

This is all pretty much in line with points that I made a few years ago. As I said at the time there would also be the further advantage that these moves would force the banks to increase their lending margin. I can just hear the property sprookers uproar, but at these low interest levels, a hand brake on low interest induced house price rises would be good. The increased lending margin will keep deposit interest rates low and therefore resist a rise in the exchange rate. In other words boost our balance of payments while resisting capital asset inflation. Something that the present RB CPI/OCR model cannot achieve.